Kuala Lumpur, 22 February 2018 – Sime Darby Plantation Berhad (SD Plantation) reported a profit before tax (PBT) of RM637 million and a net profit of RM429 million for the second quarter ended 31 December 2017 (Q2 FY2018). This represents an increase of 35 percent and 34 percent respectively, against the same period in the last financial year. The improved performance was attributable to higher earnings from Upstream Malaysia and reduced finance costs as a result of lower borrowings.

For the half year ended 31 December 2017 (1H FY2018), the Group recorded a PBT of RM1,876 million and a net profit of RM1,448 million, representing an increase of 168 percent and 208 percent respectively, compared with the previous corresponding period. The earnings include a gain on sale of land to Sime Darby Property of RM676 million and a one-off reversal of accruals of RM95 million in Q1 FY2018.

“We are very encouraged by the Group’s performance following its listing exercise back in November 2017. Our Upstream operations have been strategically geared towards achieving our initiatives to enhance productivity, profitability and cost efficiency. Accelerated replanting efforts, mechanisation and water management initiatives across our operations are well underway and have shown positive results,” said Tan Sri Dato’ Seri Mohd Bakke Salleh, SD Plantation’s Executive Deputy Chairman and Managing Director. 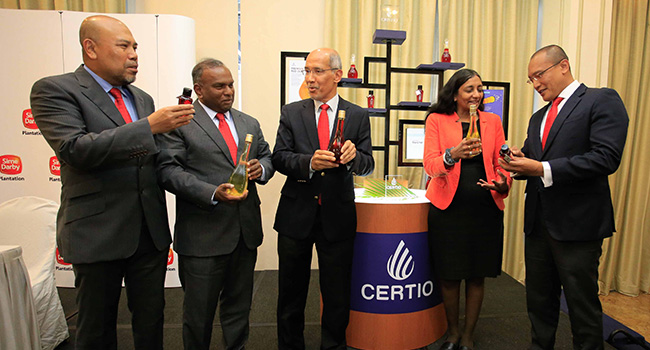 Upstream Operations
For the quarter under review, Upstream operations posted a higher profit before interest and tax (PBIT) of 26 percent at RM577 million compared to RM459 million in the previous corresponding quarter.

The Group’s fresh fruit bunch (FFB) production improved by 2 percent from 2.72 million MT in Q2 FY2017 to 2.76 million MT in Q2 FY2018 as it recovers from the impact of El Nino. Average crude palm oil (CPO) price realised reduced by 6 percent YoY to RM2,654 per MT in the quarter under review largely on account of weaker sentiment in the market.

Upstream Malaysia registered a PBIT of RM414 million in Q2 FY2018 versus RM182 million in Q2 FY2017, which represents an increase of 127 percent YoY. FFB production in the region improved by 26 percent to 1.69 million MT from 1.34 million MT in the same period last year. The better performance mainly stemmed from our sustained efforts to improve yield via replanting with superior planting materials. CPO price realised averaged at RM2,706 per MT versus RM2,851 per MT during the same period last year.

Upstream Indonesia recorded a PBIT of RM144 million this quarter compared to RM275 million the same quarter last year, representing a 48 percent decrease. This was primarily due to reduced FFB production of 0.71 million MT this quarter, as compared to 0.94 million MT the same period last year. The weaker production was mainly attributable to productivity in Sumatra being impacted by floods which hindered harvesting activities in the area. The average CPO price realised was also lower at RM2,533 per MT in Q2 FY2018 versus RM2,763 per MT in Q2 FY2017.

Upstream Papua New Guinea and Solomon Islands reported better earnings of RM39 million in Q2 FY2018 against RM17 million in Q2 FY2017. The increase of 129 percent was due to higher sales volume, which compensated the lower FFB production in the quarter under review. FFB production declined by 22 percent as compared to the same quarter last year, generally due to certain areas of PNG being affected by the dry period in June to September 2017. CPO price realised averaged at RM2,713 per MT in the current period versus RM2,961 per MT in the previous corresponding period.

Upstream Liberia registered a loss of RM20 million this period versus a loss of RM15 million the same period last year due to higher amortisation caused by the increase in mature hectarage. Despite this, FFB production in the region had increased five-fold as compared to the previous corresponding period. The average CPO price realised was reported at RM2,275 per MT in Q2 FY2018 versus RM2,499 per MT in Q2 FY2017.

Downstream Operations
Downstream operations recorded earnings of RM64 million in the current period, 41 percent lower compared to RM108 million in the previous corresponding period. This was mainly attributable to weaker profit contributions from the Bulk business which was affected by slower demand and the appreciation of the Ringgit. Meanwhile, earnings from the Differentiated business improved by 14 percent in Q2 FY2018 compared to the same period last year driven by higher sales volume, better contribution margin and higher capacity utilisation.

Other Operations
Other operations reported a PBIT of RM32 million in the current quarter versus RM3 million the same quarter last year. The better results were largely because of the recognition of dividend income of RM39 million from a long-term investment.

Interim Dividend
The Group announced an interim dividend of 3.5 sen per share for the financial year ending 30 June 2018.