The OEIBMS 2.0 is a follow-up to the success of the Lean Six Sigma (LSS) Business Management Strategy launched in 2013 by the now de-merged Sime Darby Group to achieve operational excellence benefits in terms of cost-savings, cost avoidance and improved revenue generation derived from implementing various LSS projects across the Company. With the new strategy, SD Plantation aims to further deliver RM550 million in cumulative benefits by the end of FY 2022, approximately 57% more than the RM351 million the Company achieved over a 5-year period as a Division within the Sime Darby Group.

“In FY2013, the Sime Darby Group embarked on a five-year Business Management Strategy that was to serve as a roadmap towards achieving RM775 million in LLS benefits across the Group. At the end of its 5-year implementation period in financial year 2017, the Group achieved the cumulative benefits of RM967 million, exceeding its initial target set at RM775 million. A total of RM351 million of these benefits were derived from SD Plantation, exceeding our own cumulative target of RM245 million by 42%,” said Tan Sri Dato’ Seri Mohd Bakke Salleh, Sime Darby Plantation’s Executive Deputy Chairman & Managing Director.

“With the OEIBMS 2.0, we are ready to continue our relentless focus and effort towards higher operational excellence and productivity, while aligning our vision of becoming the leading global integrated palm oil player with the nation’s productivity agenda as laid out in the Malaysia Productivity Blueprint,” added Mohd Bakke. 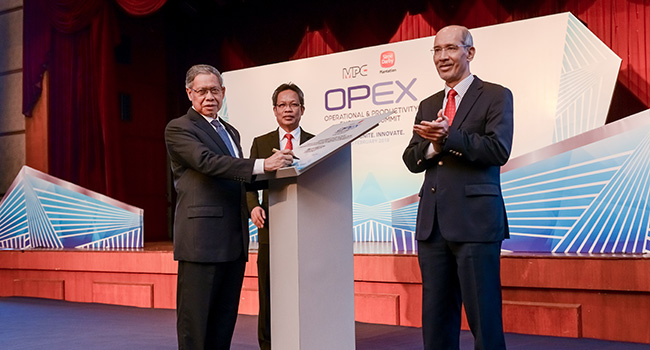 SD Plantation’s OEIBMS 2.0 was unveiled at the inaugural ‘Sime Darby Plantation Operational & Productivity Excellence Summit’. The event which was jointly organized by the Malaysia Productivity Corporation (MPC), was officiated by the Minister of International Trade and Industry (MITI), YB Dato’ Sri Mustapa Mohamed. The event was also attended by Dato’ Mohd Razali Hussain, MPC’s Director-General, representatives from MPC, as well as PNB Group of Companies and various Small Medium Enterprises. MPC, which has been an instrumental partner to SD Plantation’s pursuit of operational excellence and higher productivity, has pledged to continue its support in the implementation of SD Plantation’s OEIBMS 2.0.

“The Malaysia Productivity Blueprint (MPB) was formulated to boost Malaysia’s economic growth and raise the prosperity of the rakyat in a sustainable manner. It is the aspiration of the MPB for the private sector to drive the nation’s productivity agenda in partnership with the government, and the success of such partnership is crucial as we position the nation for global competitiveness,” said YB Dato’ Sri Mustapa Mohamed, Minister of MITI.

He added, “It is critical for Malaysia to strategise and move from input-driven to productivity-driven growth. Studies undertaken through the MPB revealed that lack of an adequate pool of talent, advancement in technology, a competitive incentive structure for businesses to leverage on, transparent business environment and a productivity mindset had contributed to low productivity growth over the years. However, these challenges can be overcome and become something of the past as the MPB has been structured to overcome these hindrances and steer the economy on the right growth path.”

The MPB was launched by the Prime Minister in 2017 with the aim of achieving 3.7% productivity growth target set in the Eleventh Malaysia Plan (2016-2020). The Blueprint outlines five strategic thrusts, ten national initiatives, 32 sectoral initiatives and 16 key activities. In addition, nine productivity nexus were established to foster greater collaboration among the Government and private sector to boost productivity. It is one of the public-private governance models where the Government plays an enabling role while the private sector leads in implementation efforts on productivity.

Central to SD Plantation’s implementation of its OEIBMS 2.0 is a holistic approach that not only incorporates a vision and measurable target to achieve higher operational excellence and productivity, but also the development of capacity and skills as well as the cultural transformation of its workforce.

Over the course of the last 5 years, SD Plantation has internally developed over 1,500 LSS practitioners and internal consultants, some of which have been certified by the American Society for Quality (ASQ). The Company has also achieved recognitions and awards at various local and international excellence platforms. These include, among others, the Overall Champion at the MPC’s Annual Productivity and Innovation Conference (APIC) 2017, Gold Medalist at the Indonesia’s Operational Excellence Conference (OPEXCON) 2017 and Silver Level Award at the ASQ’s International Team Excellence Award (ITEA) 2017.